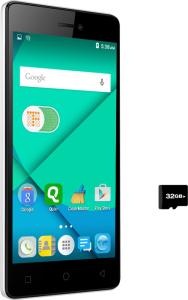 Micromax has come up with another Smartphone of its Juice series, named Micromax Canvas Juice 4 Q382. At present, big battery backup mobile phones are extremely in demand in India. In order to get hold of this segment, Canvas Juice 4 is the best one for you.

The mobile phone has been listed on Micromax’s website, but the pricing details have not been mentioned yet. Nevertheless, after looking at the features, Canvas Juice 4 will possibly be budget Smartphone. It is a dual SIM Smartphone, which accepts two standard SIMs.

Let us have a look at the specifications of Canvas Juice 4:

It houses 8GB inbuilt storage capacity that can be extended up to 32 GB with the help of microSD card. Regarding the connectivity front, Micromax Canvas Juice 4 is no less. It incorporates 3G, GPRS / EDGE, Micro-USB, Wi-Fi, GPS/ A-GPS, and Bluetooth feature. In addition to this, it encompasses an accelerometer, ambient light sensor, proximity sensor, and magnetometer.

If the camera features is talked about, this phone sports 5-megapixel autofocus camera along with LED flash on the rear plus 2-megapixel front facing camera for selfies.

It runs on android 5.1 and is power-driven by a 3000 mAh non-detachable battery. It can render more or less 11 hours talk time as well as 385 hours standby time, as per the company.

Micromax, one of the leading mobile manufacturer in the Indian market is an important player in budget mobiles segment. Besides, budget mobile phones and Smartphones, it also manufactures two-in-one devices and tablets for the users. As per the official listing, Canvas Juice 4 supports ten regional languages and even more, it comes with First Touch menu already installed in it. It also has few pre-installed applications such as Amazon shop, Amazon Kindle, Snapdeal, and Scandid.