Microsoft is all set to launch its Surface Pro 4 in India on Jan 7th. The company has starting sending the invites for the launch event. Earlier in November, last year Microsoft CEO Satya Nadella at Microsoft’s Future Unleashed event in Mumbai announced the company’s plans to launch the Surface Pro tablet in India in January. Since then we are excited to unwrap the features and specification that this device embraces. 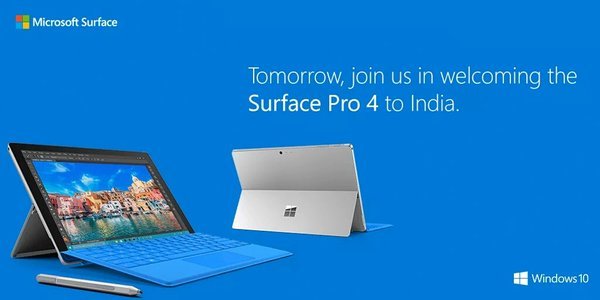 The Surface Pro 4 emanates with a 12.3-inch, 2736 x 1824 pixel sense screen with a pixel density of 267ppi. High contrast and low glare allows you to work the complete day hassle-free without straining your eyes.

This wonderful Microsoft Surface Pro 4 which runs on Windows 10 turns into unvarying laptop by attributing type cover and improved keyboards.

As far as the cameras are concerned, the Microsoft Surface Pro 4 packs an 8-megapixel primary camera on the rear and a 5-megapixel front shooter to click amazing selfies. The Surface Pro 4 includes Ambient light, Accelerometer, and Gyroscope sensors.

The device with battery backup of almost 9 hours comes with an aspect ratio of 3:2, which is comparable to a 35mm frame. For connectivity it is offering Wi-fi 802.11ac, Bluetooth 4.0 and a full size USB 3.0 port.